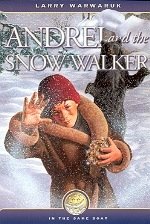 Andrei and the Snow Walker

SKU 00000108
C$9.95
In stock
1
Product Details
It's 1900, and Andrei's family has left Ukraine for a Canadian homestead near Batoche, Saskatchewan. Twelve-year-old Andrei works harder than ever before to help his family build a new life. Andrei also dreams of owning Vityr, a beautiful bay colt that runs like the wind. Then he can learn to be a great horsemean - like the Cossacks his grandfather, Dido Danylo, loves to talk about. Dido has also brought a Scythian cup to Canada, a relic of the people of ancient Ukraine. The cup gives Andrei strange visions. But Andrei's new land has magic of its own. His Metis friend, Chi Pete, tells stories of Snow Walker, a man of great power and wisdom. When Andrei gets lost in a terrible blizzard, where can he turn for help?
Save this product for later
Display prices in: CAD