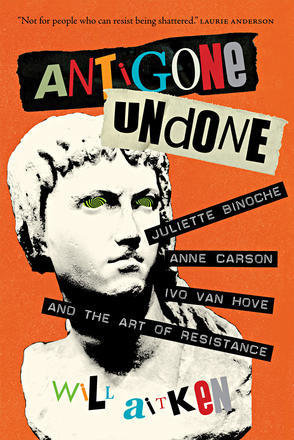 SKU 00001621
C$24.95
In stock
1
Product Details
Antigone Undone offers an urgent and mesmerizing account of the creative and destructive power of great art.

In 2015 Will Aitken journeyed to Luxembourg for the rehearsals and premiere of Anne Carson’s translation of Sophokles’ 5th-century BCE tragedy Antigone, starring Juliette Binoche and directed by theatrical sensation Ivo van Hove.

In watching the play, he became awestruck with the plight of the young woman at the centre of the action. “Look at what these men are doing to me,” An­tigone cries, expressing the predicament of the dispossessed throughout time. Transfixed by the strange and uncanny power of the play, he finds himself haunted by its protagonist, finally resulting in a suicidal breakdown.

With a backstage view of the action, Aitken illuminates the creative process of Carson, Binoche, and Van Hove and offers a rare glimpse into collaborative genius in action. He also investi­gates the response to the play by Hegel, Virginia Woolf, Judith Butler, and others, who too, were moved by its timeless protest against injustice.
Save this product for later