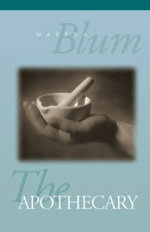 SKU 00000155
C$19.95
In stock
1
Product Details
A dramatic novel exploring the lives of those caught up in the dreadful and arbitrary violence of World War II in Czernowitz, and its aftermath in Vienna.
The Apothecary continues the story of the characters from The Walnut Tree, this time focusing on Felix. Like his sister S?ssel, Felix is a pharmacist, and the book follows his life, and those of several other important characters, from the city of Czernowitz during the war years to Vienna in the 1960s.
The forties are presented with the immediacy and reality that could only be supplied by someone who has lived this astonishing experience. Felix saves a young Jewish girl from being deported by the Russians, and procures the release of his own parents from cattle cars because a local Soviet official is in love with him. Then, when the German army moves in, Felix has to escape on his own, fleeing into the Caucasus Mountains to save his life.
Twenty years on, Felix finds his childhood sweetheart, Martina, in Vienna, married to a former German soldier. Gerhardt is wracked by guilt because of his actions in Czernowitz during the war. Gerhardt's story, Martina's, Felix's and others, are all told with the same intense intimacy of detail.
The Apothecary is filled with fascinating characters and chilling circumstances. Its style and originality, its charm and vividness, its lovely imagery and its wisdom, all make it an important book. It is the third book in an informal trilogy dealing with Jewish life in both cosmopolitan cities and in an East European village in the first half of the 20th Century - an outstanding literary accomplishment.
Save this product for later