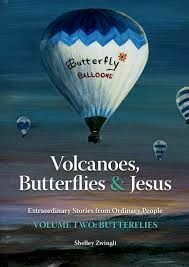 SKU 00001796
C$23.50
In stock
1
Product Details
In the second volume of her very personal series on her own NDE, self-acclaimed "ordinary woman" Shelley Zwingli goes beyond her own life-changing story to share 17 additional stories of those who have reached out to her, either from reading her first book, Volcanoes, Butterflies & Jesus: the Extraordinary Visions of an Ordinary Woman or her blog divinesigns.ca. These stories show evidence of both the commanlity of those who have NDEs and other life-changing spiritual experiences and the differences each individual observers.

In the first volume, Volcanoes, Zwingli shares in riveting details the 44 consecutive hours of waking visions that followed in a near-death experience she had around a medical emergency, and in the final volume of the series, Jesus, Zwingli will share many methods she has learned of and developed on her own to allow miracles to keep working in your life.

Whether or not you've experience something similar, the stories in Butterflieswill inspire and lift you up with the power of shared storytelling. Hope is renewed; Heaven is closer than you think.
Save this product for later