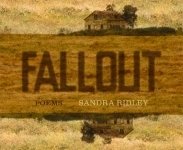 SKU 00000665
C$17.95
In stock
1
Product Details
Fallout embraces the darkness of the 20th century in poems that inhabit both the fear and wonder of that time. On the surface Fallout appears to be about the legacy of the nuclear age yet Ridley writes with a subversive humour that counters the fierceness of her subject. In her world, madness intrudes upon the mundane as a Nevada casino shakes during a "test", a white train rumbles through the night transporting nuclear weapons and a couple takes up residence in a vacant nuclear weapons silo.

Ridley's poems veer from the terrifying to the tender, the comic to the apocalyptic, the ironic to the philosophical, and the cosmic to the domestic - often within the same poem. This is an energetic and entertaining new voice in Canadian poetry both insightful and playful by turns. At the heart of the book is an elegiac tone that points to a more hopeful future. The book ends with an award winning sequence of ghazals written about the death of a young sister that leaves the reader breathless.
Save this product for later