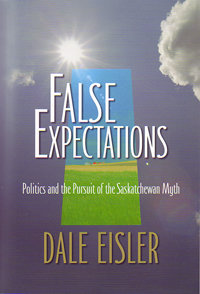 False Expectations: Politics and the Pursuit of the Saskatchewan Myth

SKU 00000041
C$24.95
In stock
1
Product Details
Myth has played an important and ongoing role in the development of Saskatchewan's political economy and collective identity.
It has been expressed in many ways. First, during the time of the National Policy, Saskatchewan was portrayed to immigrants as a promised land. This period served as the psychological and economic foundation for the province. When believe in Saskatchewan as a promised land was shattered by the Great Depression and Dirty Thirties, the myth was reconstituted through the inspiration of the social gospel. It was then politically reinvigorated in the meaning of medicare and has been expressed in recent decades through the competing vision for economic development. Through all those eras, no matter what the tides of politics, there remained one constant - the singular, collective idea that Saskatchewan was a special place with unrealised potential.
The challenge for the public dialogue of Saskatchewan, as the province enters its second century, is not to replay the mistakes of the past. Saskatchewan people must recognise the role that myth has played, and must continue to play, in the life of the province. But, at the same time, they must differentiate it from reality by understating the power of myth as a force for progress and its potential to create false expectations.
Dale Eisler is a former journalist who has written extensively on Saskatchewan politics, public policy, and government.
Save this product for later
Display prices in: CAD