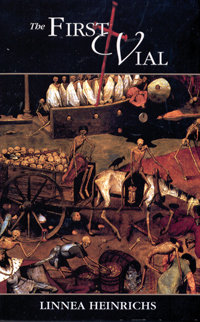 SKU 00000414
C$12.95
In stock
1
Product Details
Katherine, Lady of Crenfeld Castle, pits her wits against the enemies trying to take over her castle. After surviving two attempts on her life by a land-humgry priest, she is forced to leave her castle just as the plague engulfs her village. The villainous pries seizes her lands, convicts the innocent, and vurns them at the stake. Balanced with intrigur and action, The First Vial builds to a feverish pitch as death saturates the country and Katherine must battle not only for her lands and castle but for her life. Set against the backdrop of the horror of the fouteenth-century plague and medieval heroism and chivalry, The First Vial details the morbid reality of a time when the Black Death forced people to take the law into their own hands to survive the wave of chaos that was ushered in. Heinrichs's categorical research into medieval town life, castles, and the Black Death, make the The First Vial a noteworthy companion to Connie Willis's Hugo-winning Doomsday Book and clearly mark Heinrichs as a new talent in this genre. Linnea Heinrichs was born on Vancouver Island nad lives with her husband and two children on a small hobby farm in northern B.C. This is her debut novel.
Save this product for later