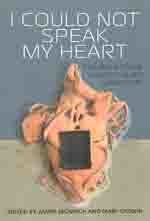 I Could Not Speak My Heart: Education and Social Justice for Gay and Lesbian Youth

SKU 00000035
C$24.95
In stock
1
Product Details
This anthology documents the pain and misunderstanding that LGBTTQ (Lesbian, Gay, Bisexual, Transgendered, Two-spirited, Queer) people have experienced in the very recent past. It then demonstrates the real progress, both in theory and in practice, that has been made and will continue to be made in the 21st century. The struggle for equite and social justice for gay and lesbian youth is far from over, however, and much work remains to be done. A million people may watch or foin the Gay Pride Parade in Toronto, But the debate about the status of queer citizens continues across Canada. Homophobia in its many forms continues to be an all-too-frquent factor in the lives of LGBTTQ citizens, particularly the young. Readers will find much diversity in this collection of nineteen articles: autobiography, testament, fiction, and found poetry, as well as more traditional personal and analytic essays. The reader will also see differences in intellectual perspectives across the chapters: human rights, social reform and human justice, feminist theory, liberationist theory, and queer theory. It is the intention of the editors that this book be used by educators in many fields so that students preparing for professions in education, in social work, in human justice, and in health and environmental studies will better understand the need to combat homophobia and to embrace and celebrate sexual differences.
Save this product for later
Display prices in: CAD