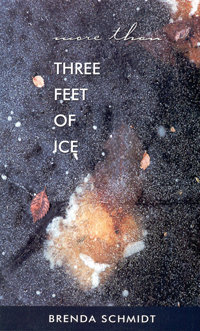 More Than Three Feet of Ice

SKU 00000416
C$15.95
In stock
1
Product Details
Brenda Schmidt's poetry reads like a naturalist's tour of the Canadian north. In language both deft and pure, Schmidt creates the relationships between external and internal landscapes, examining the impacts left by the travellers who seek the wealth of the north's respurces. From melancholy to joy, More Than Three Feet Of Ice measures the non=renewable against the renewable, and the past against the present, in one of the last frontiers on earth. Praised by such contemporaries as Lorna Crozier, Brenda Schmidt has emerged as a distinctive voice, necessary and appropriate for the conscience of our time. "Every once in a while a poet comes along whom you suddenly know you've been waiting for. Clear-eyed, original, imaginative. Brenda Schmidt is such a poet. She makes a familiar landscape unfamiliar in a most disarming way." - Lorna Crozier.
Save this product for later