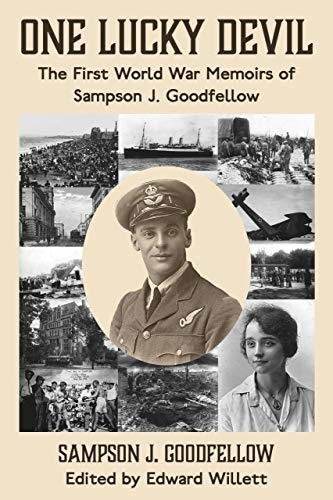 00001717
C$19.95
In stock
1
Product Details
Edited by: Edward Willett
By (author): Sampson J. Goodfellow
ISBN: 9781999382766
Publisher: Shadowpaw Press
Date: 2018
Born in Scotland, Sampson J. Goodfellow emigrated to Toronto as a child. Like many young Canadian men, he returned to Europe to serve his new country in the First World War, first as a truck driver, then as a navigator on Handley Page bombers.

Over a span of just six years, Sam witnessed Canada’s deadliest-ever tornado, sparred with world-champion lightweight boxers, survived seasickness and submarines, came under artillery fire at Vimy Ridge, was bombed by German aircraft while unloading shells at an ammunition dump at Passchendaele, joined the Royal Flying Corps, was top of his class in observer school, became a navigator, faced a court-martial for allegedly shooting up the King’s horse-breeding stables, survived being shot down by anti-aircraft fire, was captured at bayonet point and interrogated, became a prisoner of war in Germany…and, in the midst of all that, got engaged.

When Sam was listed as missing, the family of his fiancée went to a fortuneteller for news of his fate. “You couldn’t kill that devil,” she told them. “He is alive and trying to escape.” She was right.

With a sharp eye, a keen mind, a strong body, and an acerbic tongue, Sam survived, as one RAF officer put it when he returned to England after the Armistice, “enough to be dead several times.”

“You have been through hell,” a military doctor told him, “and you have been very lucky as a soldier and airman.”

Sampson J. Goodfellow really was “one lucky devil.” This is his story, in his own words.
Save this product for later
Display prices in: CAD