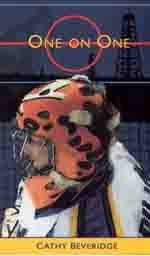 SKU 00000415
C$9.95
In stock
1
Product Details
Over the years, Sean has grown to resent his father's perfectionism and interference in his hockey. He faces enough pressure dealing with the goaltending competition to make the Mustangs. However, he's determined to give it his best shot and do it his way, even if that doesn't satisfy his father. After all, his father isn't perfect. He's being charged with negligence following a fatal accident on one of his wellsites. Is his father guilty? When Sean discovers that the fdead man is actually the father of his prospective girlfriend, Laura, he decides to investigate the credenct of his dad's story. Sean's dilemma grows when he discovers that he alone may hold critical evidence in the case of his fater's negligence. Cathy Beveridge's previous publications include: Shadows of Disaster (Ronsdale Press, 2003); Chaos in Halifax (Ronsdale Press, 2004); and, Offside (Thistledown Press, 2001), winner of the 2003 Saskatchewan Young Readers Choice Snow Willow Award.
Save this product for later