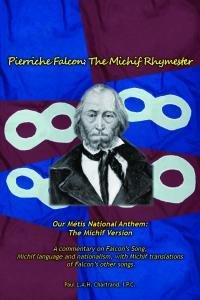 00000233
C$25.00
In stock
1
Product Details
By (author): Paul L.A.H. Chartrand
ISBN: 9780920915752
Publisher: Gabriel Dumont Institute Press
Date: 2009
Pierriche Falcon: The Michif Rhymester is a comprehensive cultural resource which includes English and Michif-French renditions of Pierre Falcon's songs by Krystle Pederson and Guy Dumont with music by John Arcand, the "Master of Metis Fiddle," and Desmond Legrace. Paul Chartrand, a distinguished Metis academic and former Chair of the Royal Commission on Aboriginal Peoples, also provides a thoughtful essay on the importance of Falcon's songs, Metis nationalism and the Michif languages. For the first time, several Pierre Falcon songs have been included in a musical compilation. Perhaps more importantly, these songs have been restored back to their original Michif voice.

Pierre Falcon was the first known Metis to compose songs. After personally witnessing many of the key events of Metis history, his tunes - particularly "The Battle of Frog Plain" or "la gournouillere," the first patriotic song created in Canada - take us back to the birth of the Metis Nation. These passionate, humourous, and ironic songs speak to the Metis Nation's resolute desire to be independent and self-determining.
Save this product for later
Display prices in: CAD