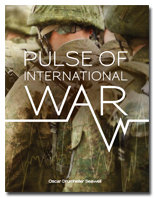 Long cycle lengths between peak international warfare levels have been decreasing, form more than 16 decades after a peak late in the 11th Century, down to 13 decades between peaks of Napoleonic Wars and World War II. Peak levels are followed by shorter length warfare pulse beats that first tend to become weaker, then grow more intense when approaching the end of long cycles, as happened with World War I preceding World War II.

Patterns from the past seven centuries are projected into the 21st Century as if repeating past history. Possible reason for the existence of the pulse of international war are suggested.
Save this product for later
Display prices in: CAD