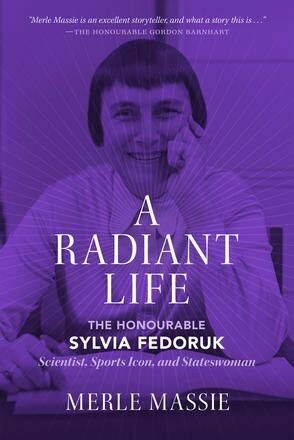 SKU 00001896
C$35.95
In stock
1
Product Details
Award-winning author Merle Massie brings to the page the life and career of Sylvia Fedoruk (1927-2012), which encompassed some of the most ground-breaking scientific, athletic and public transformations of the twentieth century. A pioneer in leading-edge cancer research, primarily in the field of nuclear medicine, she was the first woman to join the Atomic Energy Board of Canada. Sylvia was an outstanding athlete, competing at an elite level in women’s softball and curling. Elected as the first woman chancellor of the University of Saskatchewan, she went on to be the first woman to serve as Lieutenant Governor of Saskatchewan, coaching two premiers through potential legislative and constitutional crises. With support from the University, the provincial government and the media, she withstood a major outing controversy, revealing a particular provincial touchpoint around issues of homosexuality, artistic activism, and power dynamics in the midst of the AIDS crisis of the 1990s. Known for a warm but no-nonsense style, Sylvia Fedoruk built a legacy which drew Saskatchewan’s north into the provincial consciousness, advocated for equal education for all, pushed for support for women in science, technology, engineering, and math, and worked tirelessly as the University of Saskatchewan and the province’s most vocal cheerleader.
Save this product for later