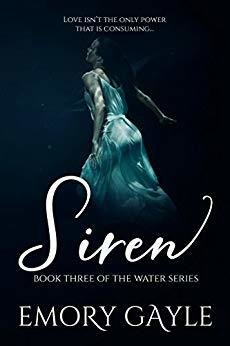 Ana has awoken in Cora's body, bound and determined to destroy all that Cora holds most dear. First to go...Darrien. But, something throws a wrench into her plans. Something more dangerous than any foe she has ever faced. Will it be Ana's undoing...or her savior?
Cora wakes in Ana's body deep in the ocean and in the company of two, now, ex-Sirens. The trio become fast friends as their path to see Cora’s father leads them on a journey that is both full of love and danger. When their quest turns deadly, Cora is forced to use a power that she still doesn’t fully understand. Will Cora’s power, friends, be enough to stand against one of the most powerful beings on earth? Or will Cora be consumed by a power she can’t control?
Darrien’s heart is breaking as he watches Cora seek the attention of another at camp. But, when a couple of unexpected guests show up, Darrien is given distraction and hope in the most unlikely of ways. In the end, will Darrien see through Ana’s charade and mend his broken heart? And if so, will he be able to find Cora before the allies of Oceanus do?

Things will never be the same as great powers, mythological creatures, and love like no other are awakened in this stunning next instalment of the Water Series!
Save this product for later