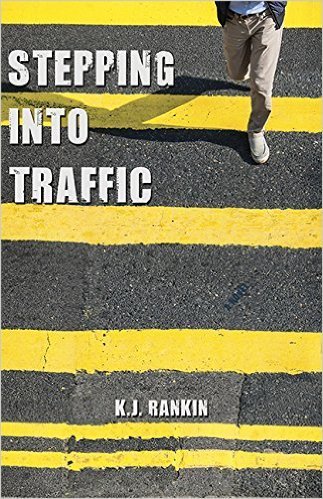 Stepping Into Traffic: A Novel

The title Stepping into Traffic is a play on words (and a metaphor) reflecting the protagonist’s actions. When we meet Sebastian (Seb) he is already taking risks and putting himself in harm’s way as he and a couple of his friends carry out a failed break and enter and are arrested. As we get to know Seb we discover his life has been a series of bad foster experiences that have left him numb to the memories of his dead parents, and poor in his judgement of how to fit in. Much of his foster care has been damaging to his self-esteem and moral codes. He is not strong and his fears begin to mount.

Awaiting his court appearance, Seb is placed in his eighth foster home in seven years in the company of Mrs. Ford, a foster home caregiver, whom Seb finds familiar and comforting. Memories of his early home life flood him and he begins to find a sense of well-being and trust. However, Seb’s troubles soon reappear in the form of wealthy, manipulative drug dealer Donny Malner. Lured by Donny’s social power and blind to Danny’s ruthlessness, Seb seeks his approval. Soon he is entwined in Danny’s drug-dealing world where violence and lies direct most actions. Though Mrs. Ford continues to stand by him, he knows he is betraying her trust. Soon Seb is caught up in a wave of violent circumstance that neither Mrs. Ford nor his unusual mentor the school janitor, Mr. Frogly, can help him out of.

In a final showdown with Donny and gangland members, Seb must decide what he will do. His dilemma is as great as the fear he faces: engage in the revenge he seeks and lose the closest thing he has had to a home, or stand up to his mistakes, reveal his lies, and accept the consequences. Though he is not ready, Sebastian steps out into the traffic.